The Ural story begins in 1939, during the USSR’s pre-World War II planning. Despite the Molotov/von Ribbentrop Pact, the Soviet Union knew it would soon be going to war against Adolf Hitler, the ruthless dictator of the German Third Reich. Joseph Stalin ordered the military to prepare all areas of operation, including the ground forces that would defend the Russian motherland against invading German Panzers, ground troops, and Special Forces. Having seen the effects of the Blitzkrieg against the Polish Army, mobilization was of paramount importance to the USSR.

A meeting was held at the USSR Defense Ministry to discuss what motorcycle model was most suitable for the Red Army. The Army had wanted to modernize its equipment after termination of the military conflict with Finland, as the motorcycles it had been using had not worked satisfactorily. Their technology was outdated and the manufacturing quality left much to be desired.

The official version reads that, after long discussion and debate, the BMW R71 motorcycle was decided to most closely match the Red Army’s requirements. Five units were covertly purchased through intermediaries in neutral Sweden and smuggled to Russia. Soviet engineers in Moscow busily dismantled the 5 BMWs. They copied every detail of the BMW design and made molds and dyes to produce their own engines and gearboxes in Moscow. Everything about the bike was reverse engineered. Early in 1941, the first trial samples of M-72 motorcycles were shown to Stalin, who immediately approved production of the motorcycles. (Incidentally, one of these original BMWs survives and is on display at the factory museum. Harley-Davidson also copied the BMW design, and delivered about 1,000 Harley-Davidson XA (Experimental Army) flat-twin shaft drive motorcycles to the US Army during World War II. Meanwhile, in Japan, Riyushko was busy copying Harley-Davidson V twins!)

A more likely story is that the BMW factory supplied the construction drawings and casting molds. As a result of the Molotov / Ribbentrop Pact, transfers of technology had taken place in support of their Soviet “friends” in different areas. Soviet engineers toured German aircraft factories and brought back complete cannons as samples. The OPEL Kadett was given to the Soviets just prior to the war; however, it commenced series production only toward the end of the war as the Moskvitch 400. In 1941, BMW began series production of R75, and did not resume production of R71.

A factory in Moscow was soon producing hundreds of Russian M-72 sidecar motorcycles. The Nazi Blitzkrieg was so fast and effective that Soviet strategists worried that the Moscow factory was within easy range of German bombers. It was decided to move the motorcycle plant further east, out of bombing range, into the middle of the resource rich Ural Mountain region. The chosen site was the small trading town of Irbit, located on the fringe of the vast Siberian steppes in the Ural Mountains. Irbit had, before the Revolution of 1917, been an important trade and fair center in Russia.

The only substantial building in town was a brewery. It was soon converted into research and development headquarters, where long hours were spent preparing for the construction of a massive new production complex for the M-72. On October 25, 1942, the first M-72s were sent into battle. Over the course of World War II, 9,799 M-72 motorcycles were delivered to the front for reconnaissance detachments and mobile troops.(Shortly after World War II, large hubcaps were produced for a new model under development. This new model, called the Glock, was never made due to copyright laws. The hubcaps were eventually donated to nearby zoos, where they became playthings for the monkeys.)

The history of Ural began with the glory of helping to defeat the terror of Hitler’s armies on the Russian and European battlefields. After World War II the Factory was renovated, and in 1950, the 30,000th motorcycle was produced. In the late 1950s, a plant in the Ukraine took over the manufacture of Urals for military use, and the Irbit Motorcycle Works (IMZ) began to build Urals for domestic, civilian consumption. The popularity of the outfits grew steadily among Russians, and in the 1960s, the plant was turned over to full non-military production. 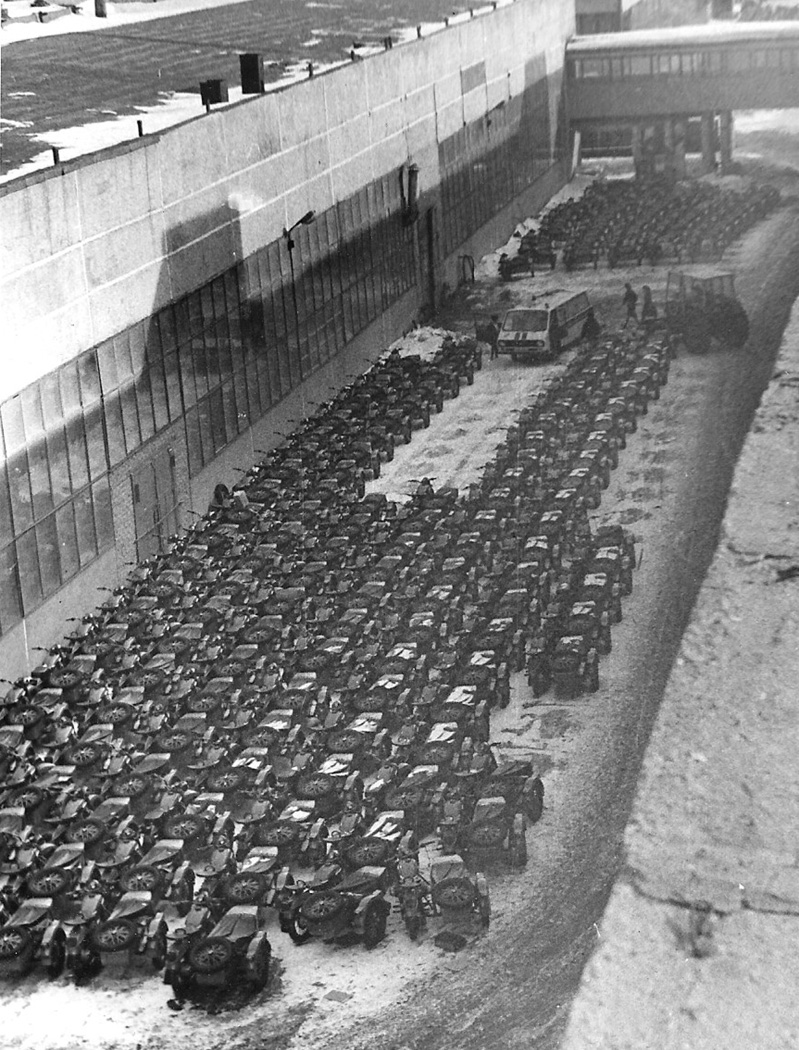 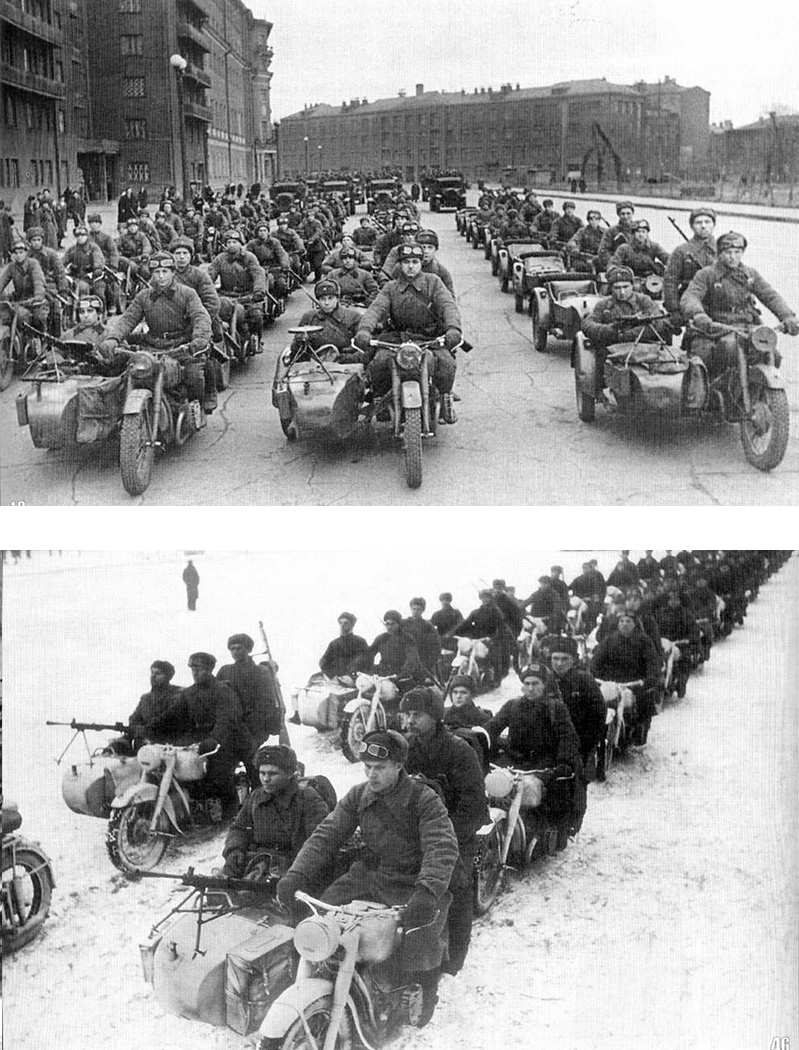 The first Urals were exported in 1953, at first mainly to developing countries. In the late 1960s, deliveries to developed countries began, and since then more and more Urals have appeared on the road on every continent. Urals are a unique combination of price, ageless styling, and sidecar functionality.

In early 1998, Ural was bought by private Russian interests; it is no longer a State-owned company.  (Shortly after the purchase, in 2000, the government shares were redistributed to investors.)  New ownership has brought new management, fresh ideas and production techniques, modernized design and updated technology, and above all, a commitment to quality control at all points of production.  Ural motorcycles have been given a new lease on life.  While outward appearance of the engine retails the look of a classic Ural, quality control techniques and using better alloying and casting, better engineering tolerances, better paint and chrome, make for a stronger, better bike.  Everything good and unique about the old Urals has been maintained, including the inherently balanced design of the horizontally opposed flat twin engine with roller bearings in a sold frame.

The main bike models built in the plant today are the heavy-duty Ural sidecar motorcycles, designed with rough Russian roads in mind. There are many places in Russia where only horses and Ural motorcycles can be used to transport gear where you need it. Ural motorcycles are equipped with four-stroke air-cooled flat-twin engines, a four-speed gearbox with reverse gear, shaft drive, two disc dry clutch, spring shock absorbers, and disc brakes.

Ural is the only Russian manufacturer of heavy capacity motorcycles, and one of a few manufacturers of sidecar motorcycles in the world. Besides sales of Ural motorcycles on the Russian market, they have also been exported to Australia, Britain, the United States, France, the Netherlands, Belgium, Spain, Greece, Norway, Finland, Sweden, Germany, Egypt, Iran, South Africa, Brazil, Uruguay, Paraguay, and numerous other countries. Over 3.2 million motorcycles have been delivered since the first M-72 rolled off the production floor.

The future looks bright for Ural, constantly improving its role as a versatile and economical form of transport that is fun to ride and easy to maintain.  The story is far from over.